A snapshot of TInnGO conceptual framework for gender smart mobility

TInnGO project has developed an innovative conceptual framework for analysing gender smart mobility; which has resulted to a new roadmap.

The TInnGO framework is offering a conceptual approach to the sum of smart transport -it refers to forms of transportation that aim to reduce the 21st century´s biggest transport challenges, such as traffic jams, environmental pollution, fatalities and time-waste; and gender and diversity mainstreaming -it is a case-based approach for integrating gender and diversity into research, policy-making, and planning. The approach converges in the gender smart mobility concept, that refers to forms of transport that take gender and diversity into consideration. Gender Smart Mobility connects to actual actions of transport research, policy-making and planning, which react on and meet the needs and aspirations of different genders as well as other social groups. 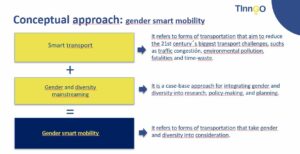 The TInnGO Roadmap offers new perspectives to approach gendered inequalities in the transport sector.  It offers a view of gender in smart transport that connects the TInnGO project with wider discourses of smart cities and notions of automated transport, smart biking and walking. It also introduces the core concepts and approaches to gender and transport, such as sex-gender analysis, gender mainstreaming and inclusive language. The roadmap also presents selected cases of gendered differences in transport and provides an outline of new methods of digital analysis and agent-based modelling in transport studies. The roadmap was developed under the lead of the University of Copenhagen (UCPH); Dr Hilda Rømer Christensen and Dr Michala Hvidt Breengaard.

The roadmap presents also the findings from the survey conducted by UCPH, which includes data sets for:

Three forward steps for gender smart analysis of transport and mobility, were identified, including:

Further information will be published soon!