Transport is a field where women face higher risks and burdens than men due to unequal access to resources, education, job opportunities and entrenched social and cultural norms. 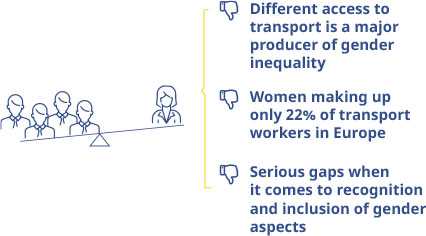 Studies have shown how men’s and women’s travel patterns differ and how different access to transport is a major producer of gender inequality.   The transport needs of the commuting wage earner are often privileged over the needs of female homemakers and carers, who make more complicated journeys as part of their social and cultural roles and many countries neither recording, modelling or recognizing the need to support different journey types, thereby perpetuating transport poverty of women into the smart mobility arena.

Furthermore, gender segregation of jobs and unequal recruitment practices apply to the transport sector, which faces serious gender gaps with women making up only 22% of transport workers in Europe.

At both European and national levels, there are still serious gaps when it comes to recognition and inclusion of gender aspects in transport strategies, research and innovation.  Especially, in the context of smart cities research gender has been marginal so far and limited attention has been placed in developing gender-specific policies, programmes, and mandates in transport.

TInnGO is a 3 years’ research project funded in the context of the HORIZON 2020 Programme of the EU, aiming to create a framework and mechanisms for a sustainable game change in European transport through a transformative strategy of gender and diversity sensitive smart mobility.

TInnGO stands for Transport Innovation Gender Observatory and explores transport as not just a means of physically moving people from one point to another, but also as a potential means towards the creation of gender equality.  It aims to open up more adequate understandings of barriers to diverse users’ access to transport as well as to labour market participation.

The project fills a gap in exploring how the different smart cities models can be made more robust and just – via the inclusion of women and marginalized groups.  TInnGO aims to open up more adequate understandings of barriers to diverse users’ access to transport as well as to labour market participation.