Expanding the Boundaries of Smart Mobility 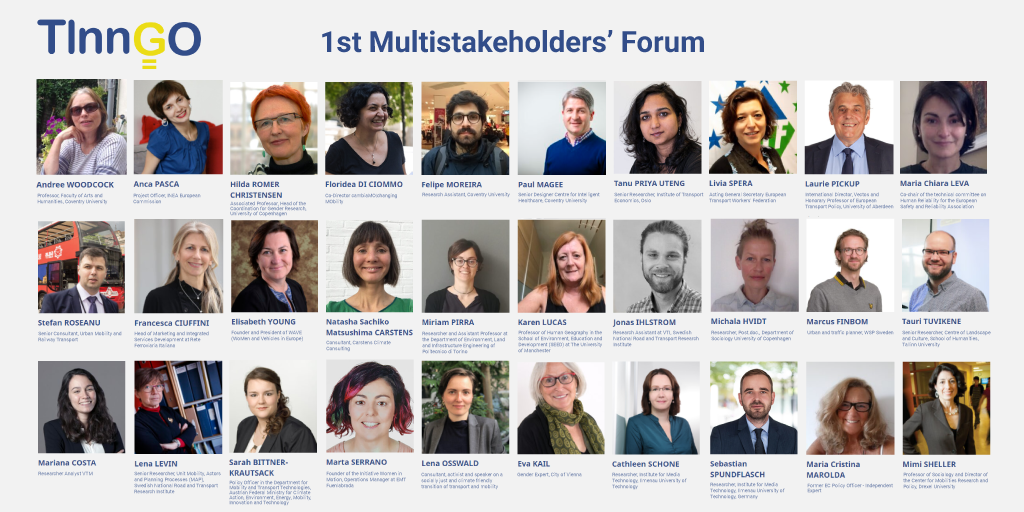 Expanding the Boundaries of Smart Mobility

The digital event, organized by this Horizon 2020 project, was attended by an international audience of over 90 people. Key notes and comments were delivered by 30 top researchers and experts in the field. Read more about the TInnGO Multistakeholders’ Forum and listen to presentations here.

22 October 2020. Cutting-edge methodologies and new disaggregated data were presented at the TInnGO Multistakeholders’ Forum, held online on Thursday 22 October, where more than 30 top researchers and experts presented cutting-edge methodologies and disaggregated data, while stressing the need for an intersectional approach to move towards a gender smart mobility for all in Europe.

The forum, attended by more than 90 participants across Europe, kicked off with an introduction to the project and a presentation of the Gender Smart Mobility Roadmap developed in TInnGO, funded by the European Union through the Horizon 2020 program. With two keynote speeches, the event addressed employment, education, intersectionality, stakeholders’ views and next challenges, in which representatives from public administrations, universities and research centres, private companies and social organisations from different European countries took part.

“We are developing new approaches and methods in targeted smart mobility areas, such as mobility, education, employment and dissemination that can be applied at local, national and international levels”, explained Andree Woodcock, Professor at the University of Coventry (United Kingdom) and Principal Investigator of the TInnGO project, the core of which is a new transport gender observatory fed by 10 hubs across Europe.

The TInnGO Observatory, aimed at becoming the reference portal for all issues related to gender and mobility in the EU, gathers data, tools, reports, and a wide range of resources available for consultation and implementation. Through this platform, TInnGO helps stakeholders address local issues of gender and diversity in transport, use TInnGO tools to combat inequalities, have national data to back research or support local initiatives, and boost women’s engagement in transport.

“According to the last available data in Eurostat, only 22% of workers in the transport sector are women”. From this and other evidence, Anca Pasca, the TInnGO project officer at the Innovation and Networks Executive Agency (INEA) of the European Union, stressed that the purpose of this project is to analyse the intersectional factors (age, ethnicity, level of income, etc.) and to assess women’s requirements for improving their participation in this sector, as well as to monitor the impact of new technologies in order to avoid discriminatory effects.

In the first session, devoted to the Gender Smart Mobility Roadmap, Hilda Romer Christensen, Associate Professor at the University of Copenhagen and Conceptual Coordinator of TInnGO, highlighted some problems and paradoxes -such as the fact that men are the drivers and women are the users of public transport. She showed two examples of TInnGO gender smart analysis: the Gender and Diversity Action Plans (GaDAPs), implemented through the hubs, and the digital analysis of visual representations of gender in transport. Hilda Romer pointed out also that the concept of gender is included in only 11 calls and intersectionality in 28 out of 200 calls in Horizon Europe, the EU’s next funding programme for research and innovation.

Other perspectives and methodologies were also shared in this session. Floridea Di Ciommo, Co-Director of the cooperative cambiaMO|changing Mobility and one of the promotors of the INDIMO project, which is aimed at breaking the barriers that women face in accessing digitally interconnected transport systems, explained that the methodology applied in this iniative is based on the identification of unmet travel needs through travel time thresholds and levels of satisfaction.

For his part, Felipe Moreira, Research Assistant at Coventry University, and member of the UK hub, showed a preliminary study on the lower use of e-scooters by women and a participatory design of tricycles, while Paul Magee, Senior Designer at the Centre for Intelligent Healthcare in Coventry University, addressed how to carry out an empathic systemic design process to create new user-centered transport solutions.

To open “imagination and possibilities of ‘gendering’ smart mobilities”, in a keynote speech, Tanu Priya Uteng, Senior Research at Institute of Transport Economics of Norway, presented Oslo’s-bike sharing scheme as an example. She showed that this scheme does not meet women’s needs. “If women were to adopt the travel patterns of today´s men, CO2 emissions from car traffic would increase by 31%”, she warned.

During the second session, entitled Creating a paradigm shift in employment in the transport business ecosystem and moderated by Stefan Roseanu, a member of TInnGO, Livia Spera, Acting General Secretary of the European Transport Workers’ Federation, a pan-European trade union organization, highlighted that “the more women work in public transport, the better public transport we will have for women”. “The transport sector is evolving and there is a lack of data of this silent revolution”, Laurie Pickup, International Director of Vectos, a consultancy based in London, added, while he showed examples of women that have created micro-enterprises in low income countries.

Under the moderation of Miriam Pirra, also from the TInnGO project, the third session focused on “creating a paradigm shift in the educational sector and research and innovation”. In this segment, Francesca Ciuffini, Head of Marketing and Integrated Services Development at the Italian Railway Infrastructure Manager (RFI), pointed out that we have “transport systems designed by men” for filling men´s transport needs, and stated that the precondition to change this reality is to increase the number of women in STEM careers.

This panel included presentations by Elisabeth Young, member of the DIAMOND project and Founder and President of WAVE (WoMen and Vehicles in Europe), a professional network created in France in 2008, , and Natasha Sachiko Matsushima, Owner and Consultant at Carstens Climate Consulting, who showed how many migrant women in Denmark have learnt to bike because in many jobs it is mandatory to be able to do it, which have positive impacts for them.

Links between transport and exclusion in urban areas

“Transport and social exclusion in rapidly developing cities” was the topic of the second keynote speech, given by Karen Lucas, Professor of Human Geography in the School of Environment, Education and Development (SEED) at the University of Manchester, who emphasized that transport is linked to almost all the Sustainable Development Goals (SDGs) of the United Nations and showed case studies in Ghana, Nigeria, Uganda, Bangladesh.

Diffferent surveys with disaggregated data where shown during the session on “intersectional approaches to understanding mobility”, moderated by Lena Levin, from TInnGO. Fresh surveys on the effects of the Covid 19 and lock downs on gendered transport modes carried out by the TInnGO Scandinavian hub were presented by Jonas Ihlström, Research Assistant at VTI, the Swedish National Road and Transport Research Institute, and Michala Hvidt, Researcher at the Department of Sociology at the University of Copenhagen.

The survey in Sweden, with 1,004 respondents -fairly representative of the national population-, did not show that Covid-19 had a different impact on transport habits of men and women, although there was an overal effect on the use of public transport: before the pandemic, only 21% never used the public transport, while during the pandemic, 50% never used it. Regarding the survey in Denmark, with 595 respondents, 48% of those that walked a bit or much more said they were willing to continue with this new habit, and the same opinion was expressed by people who used their bicycles more.

Marcus Finbom, Urban and Traffic Planner at WSP Sweden; Tauri Tuvikene, Senior Researcher at Tallinn University, and Mariana Costa, analyst at VTM in Lisbon, and member of the TInnGO project, presented some of their findings, based on mixed methods, surveys and qualitative interviews, that spurred new results and widened the scope by including attitudes towards various mobility modes

How are other stakeholders addressing these challenges?

In the fourth session, devoted to sharing “stakeholders’ reflections on gender and diversity sensitive smart mobility” and moderated by Cathleen Schöne and Sebastian Spundflasch, from the TInnGO project, Sarah Bittner-Krautsack, Policy Officer at the Austrian Federal Ministry, explained the gender measures adopted within thematic Research, Technology and Innovation (RTI) programmes, the improvements achieved -the share of female project leaders within the research program “Mobility of the Future” has raised from 10% in 2012 to 20% in 2020- and the studies carried out on gender aspects in mobility.

On her side, Marta Serrano, Founder of the Initiative Women on the Move, showed their leadership program, which is currentlymentoring 60 women in Latin America. She noted that measures such as facilitating the access to hiring processes, including the use of quotas, or establishing unbiased processes, such as CVs with no photos or personal information, should be implemented.

Lena Osswald, consultant at Changing Cities, stressed the relevance of intersectionality to analyse power structures, while Eva Kail, Gender Expert of the City of Vienna, explained how a project pilot in the district of Mariahilf led to improvements in the public infrastructure, widening the pavement and implementing more zebra crossings and seating areas.

Planning the next steps

In the last session (“The way ahead”), moderated by Hilda Romer, Mimi Sheller, Professor of Sociology and Director of the Center for Mobilities Research and Policy at the Drexel University, and Cristina Marolda, former European Commission Policy Officer and a member of the TInnGO external advisory board, outlined the way forward for initiatives such as TInnGO.

“New practices and habits are emerging because of the global pandemic. Gender mainstreaming and cross-sectoral analysis can become useful tools to promote desirable changes”, Mimi Sheller stressed. The role of TInnGO will have to be creating long-lasting relations and having an impact on the generation of intersectional data, Cristina Marolda pointed out. Finally, Andree Woodcock, Principal Investigator of the TInnGO project, highlighted that gender and diversity mainstreaming can create a paradigm shift in the transport business ecosystem, and TInnGO is actively contributing to this with innovative methodologies and new statistics.